A Fantastic Performance to a Sold-Out Audience ...THANK YOU! 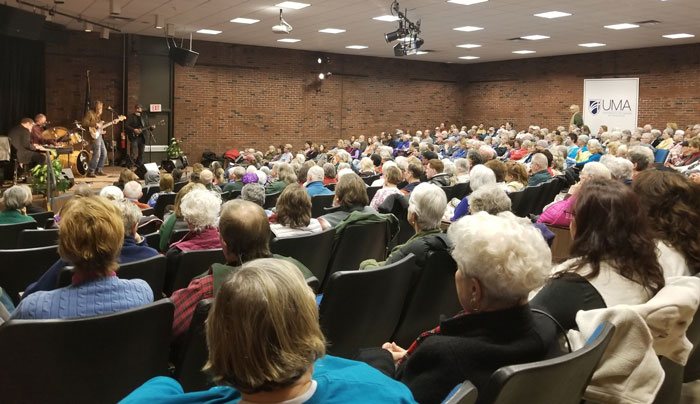 For a bunch of guys from Maine with a goofy name, the Boneheads are making a pretty big impression on the music world. Their records have consistently been praised by major publications such as Album Network, CMJ, Relix, and major market dailies including The Washington Post and The Boston Herald.

The Boneheads are based in southern Maine and feature Portland’s premiere session players and former members of many of Maines finest acts. Formed in 1991, they released their first recording on their own label River Records that same year.

The groups unique blend of roots music includes folk, rock, blues, country, Cajun, and soul, and has drawn them comparisons to The Band, Van Morrison, Little Feat, and the Subdudes. Of their live show the Boston Herald said: “They sound like The Band, played like backwoods world-beaters, and offered the nights best laugh with a brilliant polka version of Purple Haze.”

Real instruments played with real feelings…real music. The Boneheads have a full complement of original material in addition to an extensive playlist of covers. Their music is described as rootsy, all-American, it rocks and it’s acoustic. A band of honest musicians doing what they love.

They have shared the stage with Rosanne Cash, The Band, Bo Diddley, the Subdudes, the Radiators, to name a few.