An Afternoon with Paul Sullivan 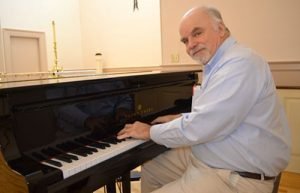 Grammy Award winner Paul Sullivan has enjoyed a richly varied and distinguished career as a composer and a pianist.

He has performed in Carnegie Hall, Siberia, and Leonard Bernstein’s living room. He has written scores for dance companies (including Pilobolus and the Rockettes), played in many of New York’s most famous jazz clubs, and taught music at both Yale University and the Brooklin, ME elementary school. He has released 20 CDs, and was awarded a Grammy in 2006 for his work with the Paul Winter Consort.

Best of all, Paul and his wife live in Maine.

Tickets are now available for purchase online by clicking above. You can also  purchase tickets at the door, at Dave’s Appliance in Winthrop or call 621-3551 for mail order tickets and information.

Back to Concerts at Jewett
×
×