PLEASE NOTE:
• Persons from the waiting list for the 2022 spring class have been pre-registered.
• The first two “Rocks and Walks” classes will be held in room 103 at the Klahr Center from 1-3:00 PM.

“Rocks and Walks” will be an outdoor journey through some of Maine’s geologic history and a great excuse to get out, have some fun, meet new people, and learn something new. Following two afternoons of classroom instruction, we will take five outdoor excursions to sites of geologic interest along the coast of central Maine over the course of the next five weeks.

The purpose of these day trips will be to explore Maine’s bedrock geologic history and develop a sense of the immense amount of time it took for Maine’s landscape to form. We will look for clues in the bedrock outcrops that reveal the complex history that the rocks have to tell. Although looking at the rocks will be the focus of these outdoor trips, there will be additional opportunities to walk beaches, visit museums and lighthouses and dine at local restaurants, or have a picnic lunch.

Site visits will be day-long and travel will be by carpooling. We will be walking to bedrock outcrops that are easily accessible but walking will be on uneven ground. The sites will have adequate parking and restroom facilities. We will be having lunch (locations to be determined) prior to the site visits.

Class size is limited to 12 individuals. There has been a high demand for this course. Please make certain that you can attend all of the field trips. People who are on the waiting list from last year will be offered the first opportunity to register for the class.

The first 2 meetings will be in a classroom setting to discuss an overview of the course. We will discuss some of the geologist’s tools including the Geologic Time Scale, how rocks are dated, and an overview of the Maine’s Geologic History. We will look at how rocks and minerals are identified and talk about some of the rocks we will see. I will be providing both handout and will email learning materials. We will work out some of the logistics such as travel and lunch stop preferences.

Following the initial classroom get-togethers, we will travel to five different areas to look at bedrock outcrops over the next 5 weeks. Field trips will be on Wednesdays, however if the weather is bad on that particular Wednesday, the Friday of the same week will be set aside as a rain date.

Prior to each field trip an agenda, maps and driving directions, along with geologic information pertinent to the day’s field trip, will be emailed. The field trips will end in time to get folks back to Augusta by 5 PM but participants will be free to schedule their return as the want. Participants will need to arrange their own transportation. Carpooling is encouraged.

Here we will look at the 421 million year old granite of the Spruce Head Pluton which forms the headlands surrounding Birch Point State Park beach. We will also look for cross-cutting younger dikes and veins and evidence of exfoliation. As the glacier that covered the State melted about 12,000 years ago, and as the rocks rebounded, the relief of the weight caused the rocks to fracture or exfoliate.

Birch Point State Park does not open until Memorial Day. We will have special permission and access through the park gate for this trip. 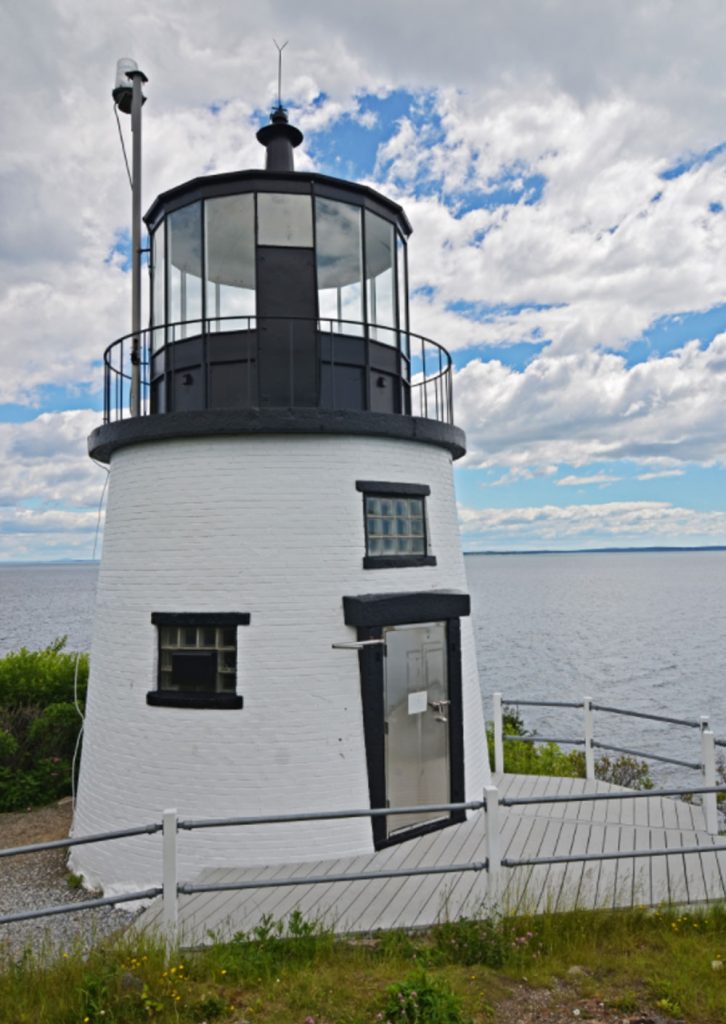 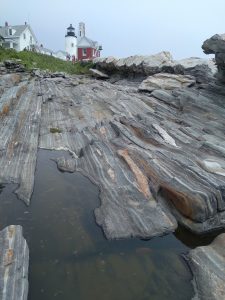 We will also see younger igneous rocks, including pegmatites that cut across the metamorphic rocks and narrower even younger veins of quartz. The younger rocks occur both as cross-cutting dikes and parallel sills. We will show how the rocks differentially erode between the metamorphic and the harder pegmatites.

These are by far the most complicated rocks and the oldest rocks that we will see. Even the geologists disagree on how these rocks were formed. These rocks were originally sediments lain down between 500 to 400 million years old and are now highly metamorphosed. The original sedimentary rock is highly contorted and fragmented and partially melted.

Dikes of younger igneous rocks cross cut the metamorphic rocks. The geology of the igneous dikes is complex with granite and basalt partially melting and intermixing within the dikes.

Note: No geology trip on May 23 which is in the week before Memorial Day. 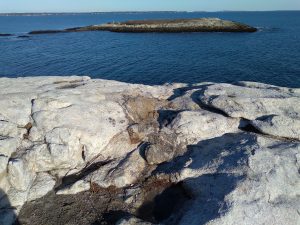 Here we will focus on looking at the rocks of Reid State Park, near Griffith Head. The rocks at Reid State Park are very similar to those at Pemaquid. The Cape Elizabeth formation, a metamorphosed sedimentary rock, is the original country rock. We will see local areas of younger igneous rocks granitic migmatites and pegmatites intertwined with the sedimentary country rock. The pegmatites here are more extensive than at Pemaquid and may actually be an intrusion rather than a product of metamorphism, especially at Griffith Head. 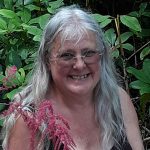 Cheryl Fontaine retired from the Maine Department of Environmental Protection as a Senior Geologist in 2016.  While there, she advised technical staff on remediating underground oil and gasoline contamination and locating replacement drinking water wells.  During the COVID-19 pandemic, Cheryl took on a task that she always wanted to do: learn more about the origin of Maine’s bedrock.  She spent a year researching the latest information on the geologic evolution of the State of Maine and visiting innumerable bedrock outcrops.

Cheryl lives in Sidney with her husband, Louis.  Her other interests include music, quilting, languages and, of course, rock collecting.