This event is open to the UMA community and general public. • Refreshments served

AUGUSTA – With bright colors erupting in powdery sprays or running in diluted washes, the paintings in Terra Plume, North Carolina-based artist Katie St. Clair’s new exhibition at the University of Maine at Augusta’s Charles Danforth Gallery, transform the forms and structures of one of nature’s most hidden realms, the secret underworld of mushrooms that connect forest root-systems, into lucid abstractions.

St. Clair explains her exhibition’s title: “Terra means earth, layers of soil, the home of mushrooms and their hidden networks of mycelium. Plume is a feather, a column of smoke rising from the ground, or a wisp of spores released when a mushroom has been disturbed. While painting, I was searching for the tangible colors, forms and textures of what I can see above ground and letting them hover like an uncanny veil over the deep earth and all that lies unknown.”

An Assistant Professor of Art at Davidson College in North Carolina, St. Clair’s work has long explored the relationship between humans and our natural environment. While her previous series Fruiting Bodies focused on the intrinsic beauty and beneficial qualities of mushrooms, the new series of works shown for the first time in Terra Plume explores the complexity and duality between what lies above and below the earth’s surface. “When we think of mushrooms, we think of the stem and cap as the whole mushroom, but what we are seeing is more like the bud of a plant. The mycelium can be thought of as the plant that grows the bud. It moves underground…this massive, unseen, scary and almost magical thing that’s all around us, that exists without our knowing.” St. Clair explains. Mushroom caps are often found under decaying leaves or germinating in the remains of damp, felled trees. These are the visible signs of a system of mycelium that threads through layers of soil and tree roots, connecting diverse organisms in a subterranean web.

Terra Plume features several multi-colored pieces of artwork, ranging from smaller “Field Notes” to large 40” x 60” canvases, as well as informational material on the duality of mushrooms and displays showcasing St. Clair’s facility with color and form. The majority of this work was created during the artist’s time at the Penland School of Craft, where she was an Artist in Residence in January of this year. An accomplished artist, St. Clair was recently awarded the Young Affiliates of the Mint’s Choice Award for her work in an exhibition at the Mint Museum. Her work was shown at the University of Alabama at Birmingham in 2019, and she worked with students at the University of Kentucky in 2018 to create a mural on the ecological importance of milkweed.

Abstracted from close observation of the terrestrial and underground structures of mushrooms, St. Clair’s series of nearly thirty paintings invites viewers into the lush visuality of an often-overlooked natural form common to the forests of North Carolina and Maine—the resilient structures that quietly bind our environment together.  In Gallica (2020), seafoam-green swirls of paint collide with powdery magenta—what the artist calls an “observational abstraction” of the mushroom of the same name. She explains, “I research. I  study the visual texture, color, form and non-visual sensations like taste, smell and touch. I rearrange those elements and come to a new awareness of the mysteries that surround me.” 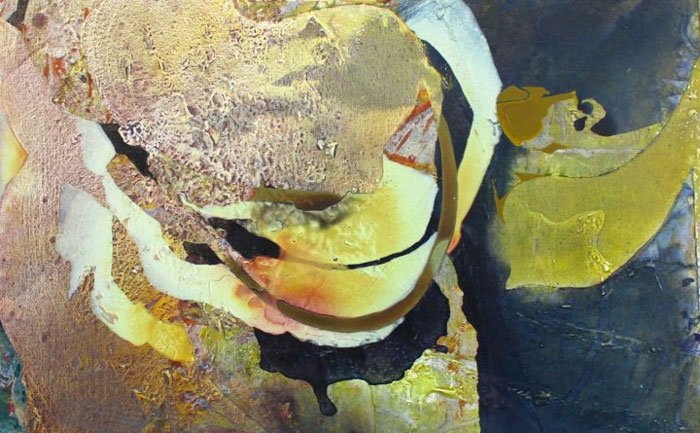 “Stories are held in the landscape.”