This 8-week course consists of an analytical and fun discussion group exploring the relative merits of selected top-rated classic films as determined by the American Film Institute (AFI), British Film Institute (BFI), and prior classes. Films are critiqued by participants. Class members are encouraged to suggest movies and lead discussions. The 8 movies for this semester are: Show Boat, 1953; Modern Times, 1936; The Big Sleep, 1946; The Black Narcissus, 1947; Tootsie, 1982; E.T. – The Extra-Terrestrial, 1982; AMISTAD, 1997; and Life is Beautiful, 1997.

Please note, because this is an online course, the picture quality will vary depending on Zoom, your internet service, and your computer. Reading the closed captions may be an issue.

Study materials will be emailed prior to each class. Accommodations made for the hearing impaired.Classroom 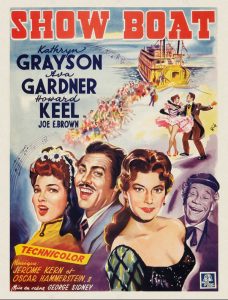 Show Boat, 1951, is an American musical romantic comedy-drama film, based on the stage musical of the same name by Jerome Kern (music) and Oscar Hammerstein II (script and lyrics), and the 1926 novel by Edna Ferber. It was made by MGM, adapted for the screen by John Lee Mahin, produced by Arthur Freed and directed by George Sidney.

Filmed previously in 1929 and in 1936, this third adaptation of Show Boat was shot in Technicolor in the typical MGM lavish style. The film stars Kathryn Grayson, Ava Gardner, and Howard Keel, with Joe E. Brown, Marge Champion, Gower Champion, William Warfield, Robert Sterling, Agnes Moorehead and Leif Erickson. Unlike the 1936 film, none of the members of the original Broadway cast of the show appeared in this version.

The 1951 Show Boat was the most financially successful of the film adaptations of the show: one of MGM’s most popular musicals, it was the third-most profitable film of that year. 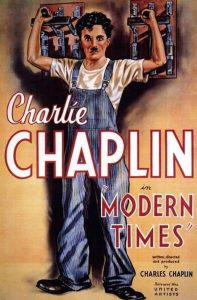 Modern Times, 1936, is an American comedy film written and directed by Charlie Chaplin in which his iconic Little Tramp character struggles to survive in the modern, industrialized world. The film is a comment on the desperate employment and financial conditions many people faced during the Great Depression — conditions created, in Chaplin’s view, by the efficiencies of modern industrialization. The movie stars Chaplin, Paulette Goddard, Henry Bergman, Tiny Sandford and Chester Conklin. It is notable for being the last time that Chaplin portrayed the iconic Little Tramp character.

Modern Times was deemed “culturally significant” by the Library of Congress in 1989, and selected for preservation in the United States National Film Registry. Fourteen years later, it was screened “out of competition” at the 2003 Cannes Film Festival. 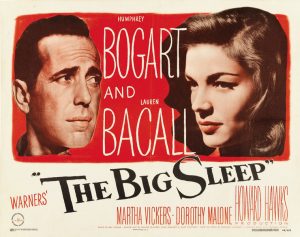 The Big Sleep,1946, is a film noir directed by Howard Hawks, the first film version of the 1939 novel of the same name by Raymond Chandler. The film stars Humphrey Bogart as private detective Philip Marlowe and Lauren Bacall as Vivian Rutledge in a story about the “process of a criminal investigation, not its results”.

William Faulkner, Leigh Brackett and Jules Furthman co-wrote the screenplay. In 1997, the U.S. Library of Congress deemed the film “culturally, historically, or aesthetically significant,” and added it to the National Film Registry.

Parts of the original, unreleased 1945 cut were significantly rescripted and shot to take advantage of the public’s fascination with “Bogie and Bacall”. The original 1945 version was restored and released in 1997.

Black Narcissus, 1947, is a British psychological drama film written, produced, and directed by Michael Powell and Emeric Pressburger, and starring Deborah Kerr, Kathleen Byron, Sabu, David Farrar, Flora Robson, Esmond Knight, and Jean Simmons. The title refers to the Caron perfume Narcisse noir. Based on the 1939 novel by Rumer Godden, the film revolves around the growing tensions within a small convent of Anglican nuns who are trying to establish a school and hospital in an old palace on an isolated mountain above a fertile valley in the Himalayas. Although some of the publicity makes it sound as if the nuns all fall in love with the same man and compete for his affections, the truth is much more complicated. One mentally ill sister does harbor a grand—and ultimately fatal—passion for the handsome libertine British expatriate who is agent for the local potentate, but he is completely unaware of her feelings until the end of the film. Her paranoid delusions embrace everyone around her and she becomes insanely envious of one sister. In fact, the greatest challenges to the nuns’ work come from the place itself and the unfamiliar people they have come to serve. 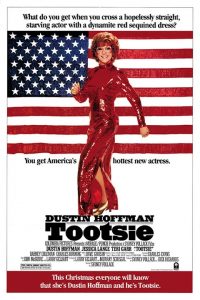 Tootsie, 1982, is an American comedy film directed by Sydney Pollack and starring Dustin Hoffman, with a supporting cast that includes Jessica Lange, Teri Garr, Dabney Coleman, Bill Murray, Charles Durning, George Gaynes, Geena Davis, Doris Belack and Pollack. The film tells the story of a talented but volatile actor whose reputation for being difficult forces him to adopt a new identity as a woman in order to land a job. The film was adapted by Larry Gelbart, Barry Levinson (uncredited), Elaine May (uncredited), and Murray Schisgal from a story by Gelbart and Don McGuire.

The film was a major critical and financial success, the second most profitable film of 1982, and was nominated for ten Academy Awards including Best Picture. Lange was the only winner, for Best Supporting Actress.

In 1998, the Library of Congress deemed the film “culturally, historically, or aesthetically significant” and selected it for preservation in the National Film Registry.

The theme song, “It Might Be You”, was performed by Stephen Bishop, with music by Dave Grusin and lyrics by Alan and Marilyn Bergman. It was a Top 40 hit in the United States and hit No. 1 on the adult contemporary chart.

E.T. – The Extra-Terrestrial, 1982, is an American science fiction film produced and directed by Steven Spielberg, and written by Melissa Mathison. It features special effects by Carlo Rambaldi and Dennis Muren, and stars Dee Wallace, Peter Coyote, and Henry Thomas with supporting roles by Robert MacNaughton, Drew Barrymore, and Pat Welsh. It tells the story of Elliott (Thomas), a boy who befriends an extraterrestrial, dubbed “E.T.” (Welsh), who is stranded on Earth. Elliott and his siblings help E.T. return to his home planet, while attempting to keep him hidden from the government. 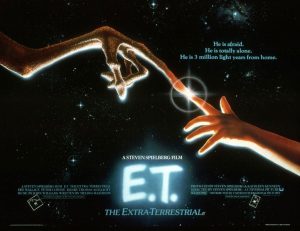 The concept was based on an imaginary friend Spielberg created after his parents’ divorce in 1960. In 1980, Spielberg met Mathison and developed a new story from the stalled sci-fi horror film project Night Skies. It was filmed from September to December 1981 on a budget of $10.5 million. Unlike most films, it was shot in rough chronological order, to facilitate convincing emotional performances from the young cast.

Released on June 11, 1982, by Universal Pictures, E.T. was an immediate blockbuster, surpassing Star Wars to become the highest-grossing film of all time—a record it held for eleven years until Jurassic Park, another Spielberg-directed film, surpassed it in 1993.

E.T. is considered to be one of the greatest films of all time. It was widely acclaimed by critics as a timeless story of friendship, and it ranks as the greatest science fiction film ever made in a Rotten Tomatoes survey. In 1994, it was selected for preservation in the United States National Film Registry as being “culturally, historically, or aesthetically significant”. It was re-released in 1985, and then again in 2002, to celebrate its 20th anniversary, with altered shots and additional scenes. 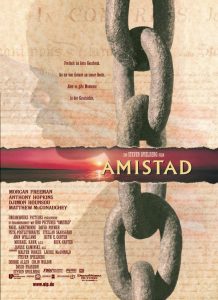 AMISTAD, 1997, is an American historical drama film directed by Steven Spielberg, based on the true story of the events in 1839 aboard the slave ship La Amistad, during which Mende tribesmen abducted for the slave trade managed to gain control of their captors’ ship off the coast of Cuba, and the international legal battle that followed their capture by the Washington, a U.S. revenue cutter. The case was ultimately resolved by the U.S. Supreme Court in 1841.

Morgan Freeman, Anthony Hopkins, Djimon Hounsou, and Matthew McConaughey had starring roles. David Franzoni’s screenplay was based on the book Mutiny on the Amistad: The Saga of a Slave Revolt and Its Impact on American Abolition, Law, and Diplomacy (1987), by the historian Howard Jones. 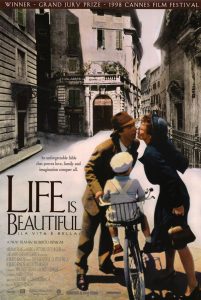 Life Is Beautiful, 1997, is an Italian comedy-drama film directed by and starring Roberto Benigni, who co-wrote the film with Vincenzo Cerami. Benigni plays Guido Orefice, a Jewish Italian bookshop owner, who employs his fertile imagination to shield his son from the horrors of internment in a Nazi concentration camp. The film was partially inspired by the book In the End, I Beat Hitler by Rubino Romeo Salmonì and by Benigni’s father, who spent two years in a German labour camp during World War II.

The film was a critical and financial success. It grossed over $230 million worldwide, becoming one of the highest-grossing non-English language movies of all time,[4] and received widespread acclaim (despite some criticisms of using the subject matter for comedic purposes). It won the Grand Prix at the 1998 Cannes Film Festival, nine David di Donatello Awards (including Best Film), five Nastro d’Argento Awards in Italy, two European Film Awards, and three Academy Awards (including Best Foreign Language Film and Best Actor for Benigni).

Chet Day has degrees in math, physics, EE/computer science, and business admin. He retired in 1995 from computer communications research for Bell System. Chet is on the UMASC Arts and Presentations Committee and volunteers for UMASC/UMA College of Arts & Sciences Concert Series. He and Deena have 4 grandchildren.

Peter Ezzy is an early supporter of Maine Senior Colleges and has served on numerous UMASC committees. He recently retired from State service after working in the human services program area for over thirty-three years. He also served as a reserve officer with the Maine Emergency Management Agency. After completing undergraduate and graduate studies at UM at Orono, he served proudly in the USAF. He is also active with the Maine Association of Retirees. He is an avid gardener and outdoorsman.