This course, coordinated by the UMASC Classic Films Committee, consists of an analytical and fun discussion group exploring the merits of classic films selected by recent class members. They critique the films, considering information provided by the American Film Institute (AFI), British Film Institute (BFI), the Academy, and top internet sites. Each class member is encouraged to lead a discussion of a favorite movie the following semester. There are 9 movies featured this semester.

We accommodate the hearing impaired. 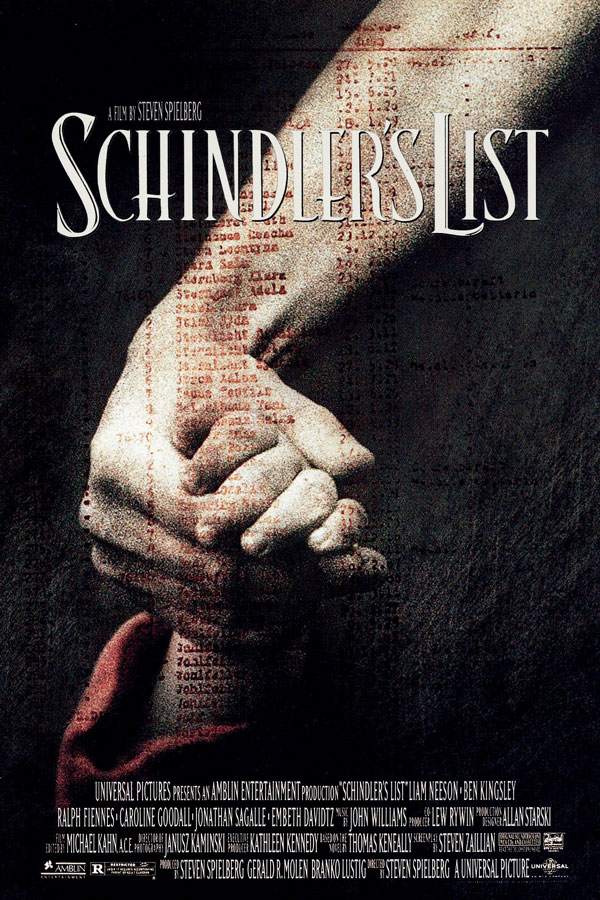 Schindler’s List , 1993, is an American epic historical period drama film directed and co-produced by Steven Spielberg and written by Steven Zaillian. It is based on the novel Schindler’s Ark by Australian novelist Thomas Keneally. The film follows Oskar Schindler, a Sudeten German businessman, who saved the lives of more than a thousand mostly Polish-Jewish refugees from the Holocaust by employing them in his factories during World War II. It stars Liam Neeson as Schindler, Ralph Fiennes as SS officer Amon Göth, and Ben Kingsley as Schindler’s Jewish accountant Itzhak Stern. Often listed among the greatest films ever made, it was also a box office success, earning $322 million worldwide on a $22 million budget. It was the recipient of seven Academy Awards (out of twelve nominations), including Best Picture, Best Director, Best Adapted Screenplay, and Best Original Score, as well as numerous other awards (including seven BAFTAs and three Golden Globes). In 2007, the American Film Institute ranked the film 8th on its list of the 100 best American films of all time. 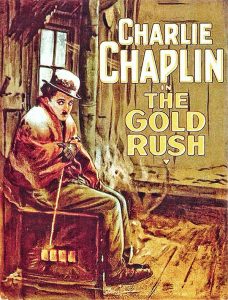 Chaplin drew inspiration from photographs of the Klondike Gold Rush as well as from the story of the Donner Party who, when snowbound in the Sierra Nevada, were driven to cannibalism or eating leather from their shoes. Chaplin, who believed tragedies and comics were not far from each other, decided to combine these stories of deprivation and horror in comedy. He decided that his famous rogue figure should become a gold-digger who joins a brave optimist determined to face all the pitfalls associated with the search for gold, such as sickness, hunger, cold, loneliness, or the possibility that he may at any time be attacked by a grizzly. In the film, scenes like Chaplin cooking and dreaming of his shoe, or how his starving friend Big Jim sees him as a chicken could be seen.

The Gold Rush was critically acclaimed upon its release, and continues to be one of Chaplin’s most celebrated works; Chaplin himself cited it several times as the film for which he most wanted to be remembered. In 1942, Chaplin re-released a version with sound effects, music, and narration, which received Academy Award nominations for Best Music Score and Best Sound Recording. In 1958, the film was voted number 2 on the prestigious Brussels 12 list at the 1958 World Expo, by a margin of only 5 votes behind Battleship Potemkin. In 1992, the film was selected for preservation in the United States National Film Registry by the Library of Congress as being “culturally, historically, or aesthetically significant”.

In 1953, the original 1925 version of the film entered the public domain in the United States because the claimants did not renew its copyright registration in the 28th year after publication. 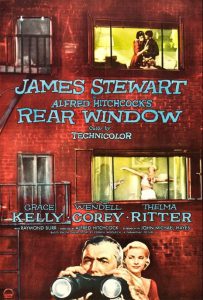 Rear Window, 1954, is an American mystery thriller film directed by Alfred Hitchcock and written by John Michael Hayes based on Cornell Woolrich’s 1942 short story “It Had to Be Murder”. Originally released by Paramount Pictures, the film stars James Stewart, Grace Kelly, Wendell Corey, Thelma Ritter, and Raymond Burr. It was screened at the 1954 Venice Film Festival.

The film is considered by many filmgoers, critics, and scholars to be one of Hitchcock’s best and one of the greatest films ever made. It received four Academy Award nominations and was ranked number 42 on AFI’s 100 Years…100 Movies list and number 48 on the 10th-anniversary edition, and in 1997 was added to the United States National Film Registry in the Library of Congress as being “culturally, historically, or aesthetically significant”. 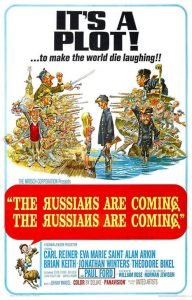 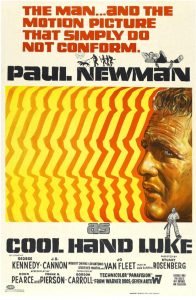 Cool Hand Luke, 1967, is an American prison drama film directed by Stuart Rosenberg, starring Paul Newman and featuring George Kennedy in an Oscar-winning performance. Newman stars in the title role as Luke, a prisoner in a Florida prison camp who refuses to submit to the system. Set in the early 1950s, it is based on Donn Pearce’s 1965 novel Cool Hand Luke.

Roger Ebert called Cool Hand Luke an anti-establishment film shot during emerging popular opposition to the Vietnam War. Filming took place within California’s San Joaquin River Delta region; the set, imitating a prison farm in the Deep South, was based on photographs and measurements made by a crew the filmmakers sent to a Road Prison in Gainesville, Florida. The film uses Christian imagery. 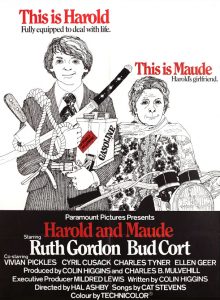 Harold and Maude, 1971, is an American romantic black comedy–drama film directed by Hal Ashby and released by Paramount Pictures. It incorporates elements of dark humor and existentialist drama. The plot follows the exploits of Harold Chasen (Bud Cort), a young man who is intrigued with death, and who rejects the life his detached mother (Vivian Pickles) prescribes for him. Harold develops a friendship, and eventual romantic relationship, with 79-year-old Maude (Ruth Gordon) who teaches Harold about the importance of living life to its fullest.

The screenplay by Colin Higgins began as his master’s thesis for film school. Filming locations in the San Francisco Bay Area included both Holy Cross Cemetery and Golden Gate National Cemetery, the ruins of the Sutro Baths and Rose Court Mansion in Hillsborough, California.

Critically and commercially unsuccessful when first released, the film eventually developed a cult following, and first made a profit in 1983. The film was selected for preservation in the National Film Registry in 1997, and was ranked number 45 on the American Film Institute list of 100 funniest movies of all time in 2000. The Criterion Collection released a special edition Blu-ray and DVD in 2012. 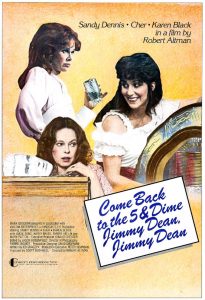 Come Back to the 5 & Dime, Jimmy Dean, Jimmy Dean, 1982, is a comedy-drama film and an adaptation of Ed Graczyk’s 1976 play. The Broadway and screen versions were directed by Robert Altman, and stars Sandy Dennis, Cher, Mark Patton, Karen Black, Sudie Bond, and Kathy Bates.

As with the original play, the film takes place inside a small Woolworth’s five-and-dime store in a small Texas town, where an all-female fan club for actor James Dean reunites in 1975. According to a 2014 interview with playwright Ed Graczyk the setting of the play is actually an H. L. Kressmont & Co. Five and Dime. Through a series of flashbacks, the six members also reveal secrets dating back to 1955.

Jimmy Dean was the first of several feature adaptations of plays by Altman in the 1980s, after the director’s departure from Hollywood. It was screened at various film festivals in North America and Europe, and won the top prize at the 1982 Chicago International Film Festival. It was well received by critics, who praised Altman’s direction and the performances by the female cast. This was the first release for New York–based independent outlet Cinecom Pictures, which Altman chose over a major studio “to guarantee a long play” in art house venues. 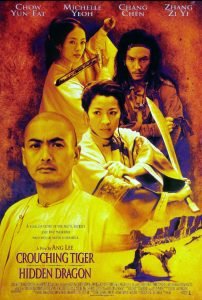 Crouching Tiger, Hidden Dragon, 2000, is a wuxia film directed by Ang Lee and written by Wang Hui-ling, James Schamus and Kuo Jung Tsai. The film features an international cast of actors of Chinese ethnicity, including Chow Yun-fat, Michelle Yeoh, Zhang Ziyi and Chang Chen. It is based on the Chinese novel of the same name serialized between 1941 and 1942 by Wang Dulu, the fourth part of his Crane Iron pentalogy.

A multinational venture, the film was made on a US$17 million budget, and was produced by Asian Union Film & Entertainment, China Film Co-Productions Corporation, Columbia Pictures Film Production Asia, Edko Films, Good Machine International, and Zoom Hunt Productions. With dialogue in Mandarin, subtitled for various markets, Crouching Tiger, Hidden Dragon became a surprise international success, grossing $213.5 million worldwide. It grossed US$128 million in the United States, becoming the highest-grossing foreign-language film produced overseas in American history. The film was the first foreign-language film (it was filmed in Mandarin Chinese) to break the $100 million mark in the United States.

The film premiered at the Cannes Film Festival on 18 May 2000, and was theatrically released in the United States on 8 December. An overwhelming critical and commercial success, Crouching Tiger, Hidden Dragon won over 40 awards and was nominated for 10 Academy Awards in 2001, including Best Picture, and won Best Foreign Language Film, Best Art Direction, Best Original Score and Best Cinematography,[3] receiving the most nominations ever for a non-English language film at the time, until 2018’s Roma tied this record. The film also won four BAFTAs and two Golden Globe Awards, one for Best Foreign Film. Along with its numerous awards, Crouching Tiger, Hidden Dragon is often ranked as one of the finest wuxia films ever made. The film has been praised for its story, direction, cinematography, and martial arts sequences. 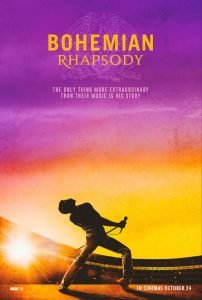 Bohemian Rhapsody, 2018, is a biographical musical drama film directed by Bryan Singer from a screenplay by Anthony McCarten, and produced by Graham King and Queen manager Jim Beach. The film tells the story of the life of Freddie Mercury, the lead singer of the British rock band Queen, from the formation of the band in 1970 up to their 1985 Live Aid performance at the original Wembley Stadium. The film stars Rami Malek as Mercury, with Lucy Boynton, Gwilym Lee, Ben Hardy, Joe Mazzello, Aidan Gillen, Tom Hollander, and Mike Myers in supporting roles. Queen members Brian May and Roger Taylor also served as consultants on the film. A British-American venture, the film was produced by Regency Enterprises, GK Films and Queen Films, with 20th Century Fox serving as distributor.

Bohemian Rhapsody was announced in 2010, with Sacha Baron Cohen set to play Mercury. After he left the project in 2013 following creative differences with producers, the project languished in development hell for several years before Malek was cast in November 2016. Singer served as director through most of principal photography, which began in London in September 2017, but was fired in December 2017 due to frequent absences and clashing with the cast and crew. Dexter Fletcher, who was originally set to direct the film early in development, was hired to complete the film; Singer retained sole director credit as per Directors Guild of America guidelines, while Fletcher received an executive producer credit. Filming concluded in January 2018.

The film was released in the United Kingdom on 24 October 2018 and in the United States on 2 November 2018. The film received praise for its musical sequences and Malek’s performance, while the editing, Singer’s direction, and McCarten’s screenplay (particularly the portrayal of Mercury’s sexuality and the lives of the other band members) received criticism. The film also contains a number of historical inaccuracies. It nonetheless was well received by audiences and became a major box office success, grossing over $910 million worldwide on a production budget of about $50 million, becoming the sixth-highest-grossing film of 2018 worldwide and setting the all-time box office records for the biopic and drama genres. Bohemian Rhapsody received numerous accolades, including a leading four wins at the 91st Academy Awards for Best Actor (Malek), Best Film Editing, Best Sound Editing and Best Sound Mixing; it was also nominated for Best Picture. The film also won Best Motion Picture – Drama at the 76th Golden Globe Awards, and was nominated for the Producers Guild of America Award for Best Theatrical Motion Picture and BAFTA Award for Best British Film, while Malek won the Golden Globe, Screen Actors Guild and BAFTA for Best Actor. 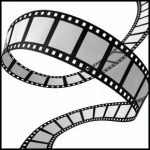