How to Talk About…

How to Talk About Climate Change
and Keep Your Friends

How to Talk About Climate Change and Keep Your Friends will address the ideological divide in this country, particularly regarding climate change, and more generally, political issues. We will utilize the insights of cognitive psychology to understand how we develop and maintain our belief structures or World View (Weltanschaung) and why it is difficult to change what we believe. The class also offers some suggestions on how to respond to climate change skepticism or denial when we encounter it.  We are encouraged to look at ourselves and recognize our own biases.  Some of the ideas presented will seem counter-intuitive and will require considerable work to appreciate their effectiveness. Hopefully, by delving into these psychological and social processes, our course will help us to more empathetically deal with the position of the “other guy.”

It is essential that you use a particular book about cognitive processes which affect our beliefs about climate change. A major part of our discussion in class will be based upon this book by Per Esper Stoknes, Norwegian cognitive psychologist, entitled What We Think About When We Try Not To Think About Global Warming.”  You will find this book easy reading, highly informative, sometimes amusing and hopefully mind-changing.

Textbook: In lieu of tuition, students are asked to purchase their textbook. Students should order it as soon as possible after registering for the course.

The textbook, What We Think About When We Try Not to Think About Global Warming:Toward a New Psychology of Climate Action by Per Espen Stoknes, April 2015, may be obtained directly from:

Syllabus: Students will use the syllabus (below) which describes basic principles of cognitive psychology as it applies to controversial subjects and a rich store of opinions, viewpoints and understandings pertinent to the nation’s ideological divisions. This syllabus is your guide to the course. Please refer to it and make full use of it.

The first part of each class, which comes before the class break, is intended to cover the concepts gleaned from the readings in Stoknes; the second part, coming after the break, is intended to present related ideas from a broader reading of other authors, and a theory about the formation of morality-toned belief systems in PowerPoint presentations.

(1) Of Students:  To read the assignment as indicated in this Syllabus (about 35 pages per week) prior to the class meeting, and make note of any questions or comments you would like to offer in group discussion.

(2) Of Instructor: To lead the class in discussion of ideas prompted by the reading.  Sample discussion questions and ideas are provided.

A. Objectives of course

PART TWO:
Understanding What We Are Talking About

“We are still just barely inside a zone where we can stove off the worst and manage the remaining long term effects.  But only if we do what is required of us in the short term.”

From the Executive Summary: “With the health and economic consequences of climate change growing at home and abroad, and in concert with the international community to provide a livable climate for today’s youth and future generations” …this report is presented…

PART TWO:
The Moral Basis for Our World Views

A. Reference: Jonathan Haidt: The Righteous Mind: Why Good People Are Divided by Politics and Religion. Moral Foundation Theory:

(Publication sources are shown in the Bibliography at the end of this syllabus.)

PART ONE:
Devices to Protect Our World View

FORMULATING THE ARGUMENT, STRATEGIZING THE APPROACH

SCALING THE WALLS OF THE DENIAL PSYCHE

PART ONE:
Signs of Acceptance?

PART ONE:
Employing the Imagination

FINDING HOPE IN THE AIR WE BREATHE
AND IN INTERNAL COMMITMENT 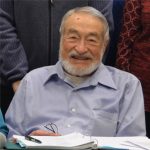 Charles Acker holds a PhD in clinical and physiological psychology from UCLA to help him understand belief systems and mind-body relationships. In the distant past he worked with community leaders, interested older citizens, Senior College Network promoters and key UMA personnel to help bring Senior College to Augusta.