Jewish Resistance during the…

Jewish Resistance during the Holocaust

Virtually all types of communal activity were forbidden to the Jews under Nazi rule. This class will look at how and why Jews organized and used underground education as a means of resistance. We begin with underground education because the groups most involved with it are the ones who become the organizers of the armed resistance movements.

This class will look at the types of communal and social resistance, including underground culture, such as theater and lecture series, social welfare organizations, and the smuggling of both food and people.

This class will discuss religious resistance such as secret worship and communal prayer, the observance of holidays and rituals, and religious education.

This class will cover the organization of groups preparing for armed resistance, their attempts to find allies outside of the ghetto, the resistance they encountered from within their own community.

This class will look at the actual armed uprisings that took place, not just in Warsaw but in virtually every Jewish ghetto in Eastern Europe.

This class will discuss the various types of resistance that occurred in both the concentration and extermination camps.

We will revisit the discussion from the first class – what resistance means to us – to see if any of our previous notions have changed and whether or not we see any connections or similarities to the various types of resistance and activities happening in our country today. 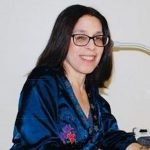 Erica Nadelhaft is the Northern Maine Educator at the Holocaust and Human Rights Center of Maine, where she presents workshops on the Holocaust, antisemitism, racism, and bias. She is also an adjunct associate professor at the University of Maine at Fort Kent, where she teaches courses on the genocide, the Holocaust, women’s history, and world history. She has a BA in history from Brandeis University and an MA in Contemporary Jewish History and Holocaust Studies from the Hebrew University of Jerusalem. She has three grown daughters and lives in Fort Kent with her husband.