Planet of the Humans:…

PLANET OF THE HUMANS:
The Impact of Humanity on Planet Earth

Explore Earth history and the evolution of life over 3 ½ billion years prior to the emergence of humanity. Learn about mass extinctions and their causes through geologic time.

Survey via contemporary science journalism the many ways that human activity, past and present, has impacted planet Earth, its land, air and seas and its ecosystems.

For the fall semester UMASC is offering three courses which have in common interest and concern with life on earth.  Bill Portola’s course “Origins of Human Evolution 2” will deal with the theme of how life came to be and how the environment shaped the course of evolution.  Richard Fortier’s course “Planet of the Humans: The Impact of Humanity on Planet Earth” will have to do with Earth history, the evolution of life and the threat to biodiversity by human-caused habitat degradation and climate change.  Chuck Acker’s course “Going Green In the Anthropocene” will emphasize what society has to do through cultural, political and technological developments to mitigate the effects of climate change.  Students are invited to enroll in all three courses as an integrated package or choose the ones dealing with their particular concern.Classroom 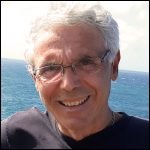 Dr. Fortier received a BS in biology at Yale College in 1969, concentrating on zoology, paleontology and evolution. He also took courses in philosophy and religious studies.  Following medical school at the University of Rochester and internship at Maine Medical Center he practiced psychiatry for 40 years in Maine until retirement in 2014. Since retirement he has pursued self-study in geology, paleontology, evolution, ecology, marine biology and environmental studies. He taught a course entitled Earth, Evolution and Extinction at UMASC in fall, 2018 and at USM in summer, 2019. In the development of that course, awareness of increased extinction rates and declines in biodiversity led to further exploration of the impact of humanity on planet earth, including man-made global warming and its risks. These studies formed the basis for a course entitled Planet of the Humans, first presented at USM Senior College in summer, 2020.

Personal experiences include laboratory and field studies with Yale Associate Professor of Biology, Keith S. Thompson; 42 years of observation of coral reefs through snorkeling in the Caribbean; an Earth Watch expedition in 2008 to study coral reefs in Thailand; observation of habitat alteration for shrimp aquaculture in Thailand; travel to the Brazilian and Ecuadorean Amazon, the Galapagos Islands, and the Serengeti in Tanzania.