Everyone writes: lists, notes to bereaved, instructions, directions, etc. Here is an opportunity to use your writing skills for more than basic uses to record and explore memories, expectations, hopes for the future and stories that need to be told. This semester we will use excerpts from “A Community of Writers” by Peter Elbow and Pat Belanoff as a starting place for our work each time we meet. We will write once or twice each session. We will have opportunities to share. At the end we will pick a piece to share in a chapbook. Instead of buying a textbook, there will be a fee of ten dollars to cover costs of printing and postage. I will provide the excerpts from “A Community of Readers”. 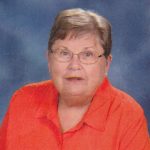 Janet Cowperthwaite has worked with Writers’ Workshop in her second-grade class and in a graduate writing class. The workshop that Janet has been leading in Senior College has evolved from those experiences, and she feels her job is to be facilitator, encourager, and cheerleader.

Janet graduated from Houlton High School in 1959 and from the University of Maine in 1963 with a degree in English and credits to be certified as an elementary teacher. She earned a master’s in education, also from UMaine in 1992.