On the surface, meeting on Zoom seems much more impersonal than getting together on campus. But that is not always the case. After all, in the past year, we have ventured into our classmates’ living rooms, kitchens, and spare bedrooms. We have had a peek at their interests and passions. Joan Farnsworth has an amazing star chart on the wall behind her, and did you notice the beautiful seascape above the fireplace at Stephanie Harkness’s home? A few of our members have shared their travels with us. Ann Sullivan has taken us to Morocco, and we traveled to Barcelona, Spain, thanks to Peter Rosenberg. We have even been to outer space via Joe Longtin’s fantastic photograph of the Space Station crossing the tail of the Neowise comet. And there is a certain instructor, who shall remain nameless, who likes to enjoy a cigar while teaching his class. Now that would never happen in a classroom! 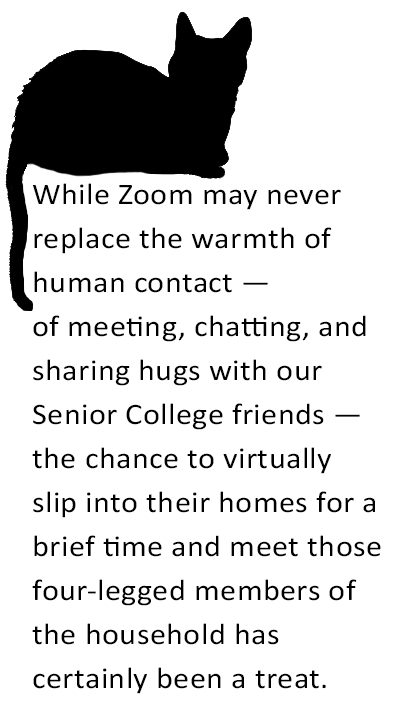 But the most fun of all is meeting those wonderful fourlegged friends that share our members’ homes! We have so often seen BC (aka Black Cat) lounging behind Bob Woodbury. Bob and wife Marion were at the shelter, looking at two beautiful Siamese sisters they were seriously considering adopting when Marion felt something tugging at her coat. It was BC grabbing at her coat and talking a mile a minute, explaining why they should take him home. He was a little over a year old then. He is 16 now and still talking.

Chairman Meow has provided a lot of moral support to Peter Ezzy as he and his other two amigos, Chet Day and Art Ray, undertook the daunting task of bringing Classic Films for Senior College to our movie lovers via Zoom. This was a major challenge, but with Chairman’s support, the class was a huge success.

Have you heard that Diane Dionne’s Spanish class has gone to the dogs! In this case, that would be Findlay. He is a West Highland Terrier, and his name means ‘White Warrior.’ At one time, he was fiercely independent, but as he has aged, he has become a bit needy and likes to sit on Nancy Perkins’s lap during the Spanish 1 class. Diane says, “So all of my students in Spanish class know the words for girl cat and boy cat from early on. (The third chapter in our book is about animals.) It was really appropriate, then, that we were finally able to actually see each other’s pets.” Diane’s own kitty, Rosie, decided she wanted equal time.

Patricia Clark is Director of Early Childhood Studies at UMA and is the faculty representative to our Senior College Board of Directors. Her assistant, Tobi, has made an 6 occasional appearance at a Board meeting, but seemed to find the whole process a bit tedious.

The Board of Directors is not the only group with furry representation. Felines are also well represented on the Office Committee. Miss Marple is Ann Sullivan’s cozy companion, and at the age of 17, she clearly qualifies for Senior College. She hasn’t been seen much in our Zoom classes, but she certainly has been heard. Ann tells us that, “Over the years, the two of us have established a regular routine, not just for mealtimes but also for petting sessions. When my little detective consults the watch on her paw and concludes that my Versa II must surely be out of order, she emits great stentorious meows.”

This big boy is Jasper, and he is in charge at the Fiedler residence. Kay adopted him from the Waterville Humane Society 7 years ago, and he’s been training her ever since. Among other things, she’s learned to turn on the water in the bathroom sink so he can drink fresh running water. He also makes sure she gets some exercise since he is often on the wrong side of the door to his favorite location, the sunporch.

Cheryl Fontaine came home from her DEP job one day 12 years ago with more than her usual equipment. That was the day two kittens (Fidget & Tip) joined the family. Tip occasionally shows up at Louis’s meetings, but he does not believe in casual Fridays! He is always attired in his beautiful gray tuxedo and white gloves.

Henrietta Baker gets the award for being the most dedicated “Mom” with so many furry (and finned) friends. Four dogs, one cat, and three fish tanks must take a lot of time! This adorable little sleepyhead is her West Highland Terrier, Gwen. She is not telling what class she was attending, but it would seem the instructor needs to pick up the pace to keep Gwen engaged.

While Zoom may never replace the warmth of human contact—of meeting, chatting, and sharing hugs with our Senior College friends—the chance to virtually slip into their homes for a brief time and meet those four-legged members of the household has certainly been a treat.

This article originally appeared in the Spring 2021 edition of the Illuminator.